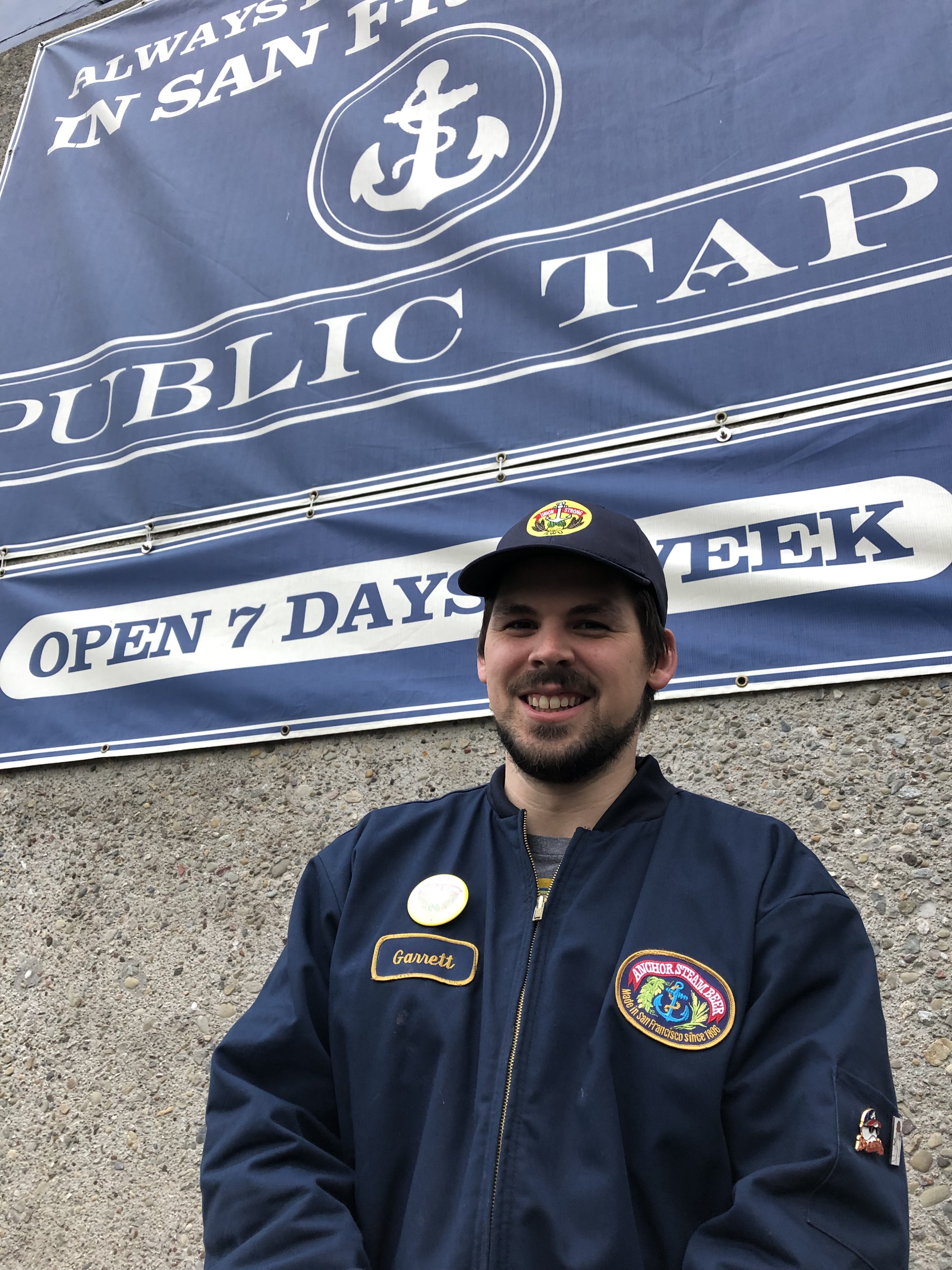 On a rainy Tuesday evening, a standing-room-only crowd gathered at Anchor Brewing’s Public Taps. Many were there at the invitation of Anchor employees. It was billed as “Worker Power Solidarity Hour With Special Building Trades Time!” The goal as stated on the Anchor Union Facebook page invitation for March 5th was to: “…do a happy hour and show management how much we like Anchor Steam.” It was part of the first brewery union organizing drive in San Francisco since the current wave of small breweries began.

Everyone entering the taproom – including those coming for Tuesday Trivia Night – was greeted at the gates by Anchor workers handing out stickers supporting the workers, thanking people for coming and answering questions about the union drive.

Garrett Kelly was one of the greeters at the door. He has been working at Anchor for three and a half years, now in fermentation. He previously worked in packaging and as a brewer. The issues are pretty simple according to Kelly. “Our starting wages are lower than they were 8 years ago. We’ve recently had our sick-leave cut in half; our benefits have been cut down. People are fed up.” He continued, “It’s been a slow and steady downward progression.” According to Kelly, the trend began well before Sapporo Brewing bought Anchor in 2017. “Our starting wages are lower than they were eight years ago. Currently, the starting wages are $16.50, down from $17.25.” According to a 2017 study by the Department of Urban Studies and Planning at the Massachusetts Institute of Technology, a living wage for a one-adult household in San Francisco is $20.58. That study, however, seems to underestimate the housing expense of San Francisco. A 2019 study by the real estate site Zumper pegs the median rent for a one bedroom apartment at $3,690, rather than $2,014 cited by MIT.

In April 2018, a group of Anchor workers approached the International Longshore and Warehouse Union (ILWU) to ask for representation according to Augustin Ramirez, ILWU’s  Northern California lead organizer. “These workers were very well organized and determined. They knew what they were doing.”

The ILWU has a deep history in San Francisco. Legendary labor leader Harry Bridges was its president for 40 years, until 1977. He became a supporter of the predecessor union, the International Longshoremen’s Association which organized maritime workers and help lead the San Francisco General Strike in 1934, on the heels of the west coast longshoremen’s strike. Those actions won higher wages, ended racial discrimination in hiring and secured health and safety standards for longshoremen all along the west coast.

This is the first brewery the ILWU is organizing. The union does have a history of organizing groups of workers not associated with the waterfront. Ramirez worked for the United Farm Workers and the International Ladies Garment Workers union before being recruited by the ILWU to come to San Francisco for a unique opportunity. He successfully organized bike messengers in 1998.

Kelly is glad that the San Francisco Democratic Socialists of America, suggested this union to work with. “The ILWU is really great. We love that they are a democratic union. We love the amount of autonomy that’s granted to individual bargaining units. We love their radical history.”

The campaign is unique only insofar that it is unusual for a craft brewery to be unionized. Otherwise, it seems to be progressing like many other campaigns. The workers quietly organized themselves and circulated union support cards, the first step in triggering a legally required election. Upwards of 70% of the 61 brewery and 10 taproom workers signed cards according to Kelly. They needed only 50% plus one. These are two separate bargaining units, so they needed 31 and six signatures respectively. Management had the option to recognize the union based on the “card check.” They chose not to. Hence, the National Labor Relations Board scheduled secret-ballot elections.

During the run-up to the elections, originally scheduled for the first week in March, but postponed until March 13th and 15th due to an electrical fire at the brewery, relations between management and the workers has proceeded cautiously. Public comments from the workers have been measured. Management has made no public comments. Management has engaged in some “by-the-book” union-fighting tactics such as holding mandatory all-employee meetings to explain why a union would not be in the workers’ best interests.

Kelly related that before the first meeting, he and two other of the main organizers were “sequestered” from the main meeting and held for a separate meeting. “For us they skipped over the part of the presentation that they deemed too antagonistic. They knew we would be talking to media outlets about it.” When asked if he was worried that the management information would erode their support, Kelly said that he was confident support would hold. “I would be surprised if we lost any folks because of this. People had their minds pretty much made up going into the meeting. We did our best as organizers to get out in front of their misinformation campaign to let people know what their likely tactics would be.”

While management evidently would like to avoid having to deal with employees through a union, the campaign does not appear to be overly adversarial. In fact, Kelly went to the Human Resources Department after the meeting from which he was excluded to ask them for a copy of the PowerPoint presentation that was shown to the other workers. They gave it to him.

In a further example of good will, after the fire, workers were sent home indefinitely and according to Kelly, inferred that they wouldn’t be paid for the time out of work. This would have been a serious blow to the workers who were already facing financial pressures. After the management received a letter from the organizing committee the company agreed to pay the workers for the week.

A union victory is not a sure thing. It never is. While Kelly remains optimistic, he acknowledges that there is some opposition. “We still have a number of people who have worked for Anchor since it was owned by Fritz Maytag so they don’t want to rock the boat.” Maytag bought Anchor Brewing in 1965. Many credit Maytag with sparking the craft beer revolution in the United States. One of the hallmarks of the brewery was the significant number of long-term employees. Kelly notes, “He took very good care of his workers. He didn’t like unions but his way of taking care of that was to pay people well and take care of his employees.”

Newly hired management executives, Chief Operating Officer, Greg Newbrough and Vice President Marketing, Scott Pederson staked out a table in Public Taps during the Tuesday event. They previously worked at Sleeman Brewing in Guelph, Ontario, Canada, another Sapporo-owned brewery. They both arrived within the past two months. They were deep in conversation while sipping Anchor beers. Every few minutes an Anchor worker or DSA member would approach them. The conversations seemed cordial and usually ended with handshakes. When approached for comments about the union drive, they declined to speak in detail for the record. They said they preferred to “keep the process in-house,” but would be happy to speak after the election. Pederson did offer that whichever way the election turned out they will come out better. Newbrough acknowledged that they needed to get closer to their employees.

Kelly opined, “Anchor Steam and the ILWU, there’s nothing that gets more San Francisco than that.”

We will report on the election results next week.