Happy February! This month is perhaps the best time of the year in our local beer community. For years Magnolia and 21st Amendment, two of SF’s brewpubs, have proclaimed February as Strong Beer Month, offering tasty line-ups of carefully crafted high gravity beers, from Barleywines to Imperial Stouts to Tripels. The general idea is that during February you drop by these two pubs several times each, punch a card for each strong beer you savor, and earn a Strong Beer goblet at the end of your month-long flight. Many of these strong ales are sure to fly out of the kegs and down happy throats before March, so the trick will be to decide which ones to try first. 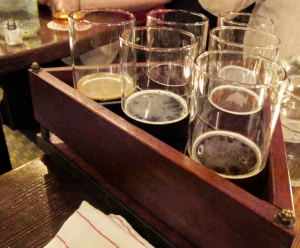 This time around, Magnolia has created another noterworthy tribute to British brewing with their “Pride of Branthill.” Ah, the British bitter. Drinkable, crisp and civilized. We mostly know American interpretations of the strongest version of the English Bitter family, the ESB. If you were to set out to make an Extra-extra ESB by using old-fashioned English floor-malted barley and traditional hops to match, you would not match the elegance of Magnolia’s special strong ale, because theirs is made from the malt which comes from a single exceptional British beer barley farm. Branthill Farm’s crop from the town of Wells-Next-The-Sea in Norfolk, displays the best attributes of English barley. It seems odd that water is sometimes described as giving local and specific “terroir” character in brewing, while the malted barley, which gives all the body, alcohol and much of the flavor usually is not. Barley malt is usually treated more like a commodity, blended for uniformity for bulk distribution, rather than as a specialized artisan crop. Magnolia has turned that around with their ongoing relationship with the farmer who brings in this Branthill malted barely. It’s cool to see that the Norfolk area is as proud of this unusual relationship as we San Franciscans are. While Magnolia has also made more traditional session-strength bitters out of Branthill’s product, the malt really shines in this example. It’s a unique beer from the heart of the Haight, glowing with the character of the topsoil and the farmer’s pride of a very specific corner of Britain.

Down near the bay and the ballpark at 21st Amendment, two collaborations are getting plenty of attention. “Imperial Jack” is a delicious reprise of the popular and medal-winning collaboration with nanobrewer Richard Brewer-Hays. “21 Rock,” the 9.7% IPA collaboration made by brewers Zambo from 21A and Rodger Davis from Triple Rock over in Berkeley is a west coast imperial IPA to try. It’s big, but not “hot” with a boozy character, nor bitter-sweet like the hoppiest of American barleywines. They are calling it a triple IPA. A sip reveals that generous helpings of hops were coaxed out of their flowery, citrusy, golden flavors to balance the bitterness. At 65 IBU, 9.7% and moderately dry, this still comes off as a balanced beauty for the hop heads amongst us.

Surprisingly, one of the note-worthy February attractions at 21A right now is not a strong beer at all, but a lighter hoppy ale called Bitter American. With less than half the alcohol as the big beers on the board, it still has rewarding hop flavors and aroma right out of the can. This is one of their brewpub favorites which has just been replicated for the 21st Amendment line of canned beers produced by contract at a production brewery in Minnesota. Working with a brewery that was built on American lager styles is another form of collaboration with challenges of its own. The weather is delightful this February, so a picnic or a little coastal camping may be in order to make the most of a canned sixpack.

There is an “unofficial” strong beer line up at Social Kitchen for February, with some worthy contenders to taste. Last week we we enjoyed a sneak taste of brewer Rich Higgins’ original and delicious light-colored strong ale with a creamy sensation and real cacao, inspired by the flavors found in a cocktail, the classic White Russian. It was well worth a trip from downtown on the N Judah street car.

Coming soon is all the joy of SF Beer Week, so the suggested strategy is to get to your Strong Beer destinations this week, and avoid missing any of these remarkable beers.

Explore Beer By BART; use our list of the San Francisco Bay Area’s best beer places with detailed transit info, so you can get out there to enjoy without driving.