The Bistro in Hayward is a cozy neighborhood bar noted for an excellent beer menu, free live music and major but compact and intimate beer festivals and events throughout the year.

The Bistro sponsors the Double/Triple IPA Festival in February, one of the key events of SF Beer Week. They also feature a hop rhizome planting festival in April. (If you want to grow elite varieties of hops on your back porch this is a don’t-miss event.)  There is an extensive and 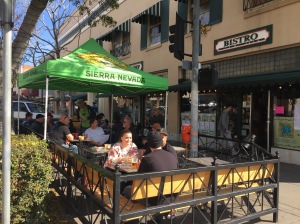 historically significant annual IPA Festival which has had all the great West Coast brewers competing for years now. Then they celebrate the harvest with a freshly-picked Wet Hop harvest beer fest in early October. The Barrel-Aged Beer Festival has followed each November since 2006, with soured, bourbon-flavored and other exotic barrel beers. Owners Cynthia and Vic Kralj always roll up their sleeves and put on world class but intimate events.

When not in the festival mode, they are a comfortable

destination with 12 taps (never short on choices of big-hopped beers) and an extensive collection of bottled Belgian beers. They usually offer a simple food menu with sandwich and soup choices. There is a nice outdoor patio on the front sidewalk.

Extras: The Bistro features live local music every night (and at festivals). You can also visit an historic brewpub from this station. Just 1 block away is Buffalo Bill’s Brewery, one of the oldest brewpubs in the nation, popular for family meal purposes.

Walking from BART: The google maps version has you exit the station towards B Street, and turn right on B, towards the hills. Continue for about three and a half blocks to the corner of B and Main. The Bistro is on your right. However, there is a simple and much-used shortcut that map will not show. Cross directly from BART, and go along the City Hall building on a pleasant walkway. As you round the building, pass a fountain and return to B street at Watkins. Continue uphill to B and Main.

(Google Maps is not displaying the shortcut, but its routes will also work.)