The little shop that changed beer tasting and bottle-buying forever, City Beer Store, south of Market and not far from Civic Center BART, turns seven tomorrow, May 18th. In keeping with a tradition that founders Beth and Craig Wathen have carefully cultivated, they will release a special beer to celebrate.  This year’s craft beer field trip saw the two of them venturing to the little town of Alpine, California, out in the low desert mountains east of San Diego to create an IPA with the esteemed Alpine Beer Company.

Beginning at noon, City Beer’s Magnificent Seven, a 7.7% American IPA brewed from seven kinds of malt and infused with seven different additions of hops, will join the pantheon of Beth and Craig co-created bottle treasures.  However, unlike some of the past creations that have been collected and hoarded by beer fanciers, an IPA is not made for long cellaring, so get it fresh if you can. 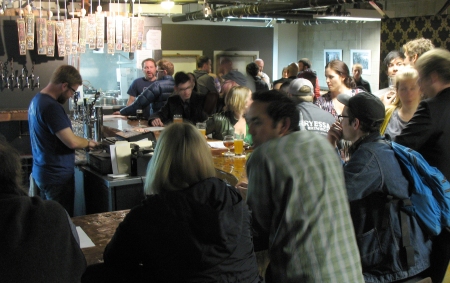 We’re still figuring out when we can swing by there to say cheers and have a glass on draft, but we may see you there.

This is yet another big weekend in San Francisco Bay Area craft beer, as we approach summer. Spring has become a time of year where nearly every week brings a run-don’t-walk craft beer event.  The sold-out Lagunitas Beer Circus, on Sunday, May 19th, will draw a crowd of beer revelers to Petaluma, and serve as a reminder for other folks to act quickly when beer event announcements come around.

Next weekend, on Saturday, May 25th, the 1st Annual NorCal Session Fest will be hosted at Drake’s in San Leandro.  The new festival will bring together dozens of great examples of California craft Session Beers — tasty brews under 5% ABV by definition of this festival, with many promised to be under 4.5%ABV. The festival will benefit the East Bay Bike Coalition, but if you don’t want to bike, you can use the BART and free shuttle bus or BART and short cab ride tactic, or even get a little walk in.  It’s easy to get there, and at the time of writing this, tickets are still available.

A few days ago we visited one of our younger local breweries, Freewheel in Redwood City, and got to appreciate the smooth and subtle flavors of their session strength English inspired beers.  Like some of the real ales being poured in the UK these days, Freewheel ales are traditional in method and strength but not necessarily in hop varieties. Some of the cask-conditioned selections showed off this lovely experimental inclination. Freewheel has partnered with two interesting English craft breweries and is brewing several of their recipes in an ongoing transatlantic partnership. It appears that you could get to Freewheel by CalTrain, by walking about a mile and a half from the Atherton station to Florence and Marsh Road, but we have not scouted that on foot yet.  So many fine beer excursions, so little time!

Freewheel will be pouring at the Session Fest at Drakes on the 25th, along with an impressive line-up that includes newcomers like Berryessa and Mavericks,  pioneers such as Sierra Nevada and Anderson Valley, and dozens more, all showing off their latest session creations in their current line-ups.

Explore Beer By BART; use our list of some of the San Francisco Bay Area’s best beer places with detailed transit info, so you can get out there to enjoy without driving.