The month of March has special significance for beer, arising from March eighth, traditionally International Women’s Day. On or around that date, all over the world, brewers now host women from their own companies and colleagues invited from their local brewing communities in an onsite day devoted to creating a charity beer.

These beers — the result of the Big Boots international brewing effort — are perhaps the most visible manifestation of the Pink Boots Society, a group that has formed to raise funds for scholarships for women working in the brewing industry. The premise is that while the industry skews male, employers are looking for people with education and experience. Many brewers, distributors and service staff are essentially self-taught until they get to learn collaboratively on the job.  So, on the production side, just to get your resume looked at despite your feminine name you had best have formal beer education among your qualifications.

This year some fine Bay Area brews are on the way! Freewheel Brewing, Laughing Monk Brewing, The Rare Barrel and Seabright Brewery all did group Pink Boots big brew days earlier in the month.

Freewheel has released their version — “Herstoric Alewife’s Golden Ale” is on at the brewery and will soon be at select taps around town.

Seabright Brewing is now pouring “Nectar of Ishtar” honey wheat ale near the Santa Cruz boardwalk, meant to be a pleasant pairing with BBQ shrimp as well as a subtle nod to the sacred brewing traditions of ancient cultures.

“Pink Boots Prophetess” is the release from Laughing Monk.  It’s coming up on Friday March 31 in SF.  The concept of Lady Grey Tea led to bags of loose tea and orange peels in an ale that just may be your cuppa tea.

The Rare Barrel’s Pink Boots Collaboration, “Solidarity Forever,” is to be released on Friday as well, in Berkeley. The process (including all the microbes that had done the heavy lifting of the beer making to create the blending beers) is described in the excellent blog post by Danielle Byers, who organized a notably democratic process for a large group to discuss and rank choices at several stages. Ad hoc teams creatively dosed small samples with drops of custom herbal tinctures to envision a blend. (The winning combo would later be executed by placing herbs and flowers directly into sour beer and given some time to infuse.)

Zeitgeist in SF will be doing an event with as many of the Big Boots brews as they can bring in. (Watch their announcements.)  Look for more beer bars to jump in. 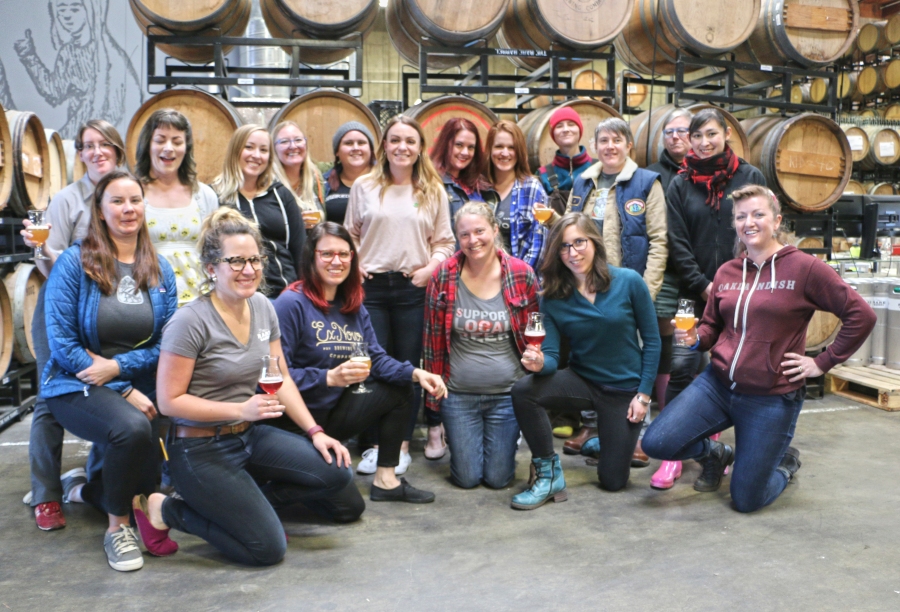 [Blending day at The Rare Barrel in Berkeley involved well-organized tasting and comparing, finally followed by a full glass of beer to simply enjoy.]

Usually the Pink Boots group takes part in an early formulation discussion. Next, somebody at the host brewery finalizes a recipe so that the ingredients can be ordered on time.  After that, the collaboration day can take many forms.

Some Pink Boots beer making days — like the sour blending session held at The Rare Barrel — are refreshingly educational and participatory.   Others are more of a brew day observation experience. Just witnessing a professional brew can be a valuable experience for sales people and front of house staffers in many cases, though it may not be as useful for most practicing or aspiring pro brewers.
There are beer sampling opportunities and photo ops at all of these events, but the most memorable and inspirational collaborations take it further, with hands-on interactions and discussion of the engineering and the effects of that particular brew deck. (Or sour beer blending procedure, in the case of The Rare Barrel.) Doing tasks rather than simply watching them becomes a key part of the group day.  Even attaching an unfamiliar type of hose connector, ceremonially adding a handful of hops to the kettle or recording the temperature on a brew log as a guest brewer brings the group together while the others snap pictures.
Whatever the level of involvement in the actual beer making processes, the primary goals of meeting the other local women in the industry and raising funds to educate women in the brewing world are first and foremost. 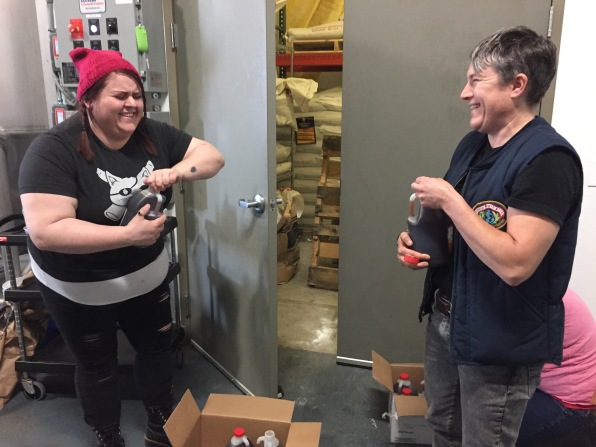 I asked some of the women at the Laughing Monk event what it all means to them:
Amelia Franklin, Laughing Monk, sales:

[Pink Boots participants learning about the blending philosophy at The Rare Barrel]
And there were more breweries making charity beers during these March brew days, around the state and around the world, most of which should be pouring now or soon.  To see world-wide Big Boots brew day images:   https://twitter.com/hashtag/bigbootsbrew2017
Words & pix by Gail Ann Williams

Scout your BART adventure on the Destinations page

Join 182 other followers
My Tweets