On September 26, an excited crowd gathered to celebrate the rebirth of a brewery in San Francisco’s Dogpatch Neighborhood.

The front of house of Magnolia Brewing Company’s 30-barrel brewery has been transformed from the Smokestack BBQ restaurant to a new restaurant with a  more diverse menu, new seating options and table service. Still in place is the large bar with a stellar spirits collection and 20 taps for beer. The venue’s new name is Magnolia Dogpatch.

In June, 2018, Magnolia Smokestack closed its doors, nine months after former owner Dave MacLean,  struggling with a Chapter 11 bankruptcy since 2015, sold his brewery to a partnership including New Belgium Brewing Company; Dick Cantwell, the departed co-founder of Elysian Brewing Company; and Belgium’s Oud Beersel lambic brewery. The new ownership team took this time to assess the business as a whole. They decided that the Haight street pub was holding its own but that that a BBQ establishment on 3rd Street wasn’t the best style of restaurant for the neighborhood. Instead, Cantwell, New Belgium co-founder Kim Jordan and consultant turned general manager Brian Reccow opted for  a “family-friendly” venue, offering a broader menu including small bites, salads, sandwiches, burgers and entrees including vegetarian dishes.

The restaurant has been substantially re-modeled. The main room now includes six comfortable booths seating four people each and several tables. Most of the stage-set-like antiquity of the former Smokestack interior is gone, but a few touches remain. A new mural painting of a woman with a flower honors the summer of love origins of the original Haight Street location. 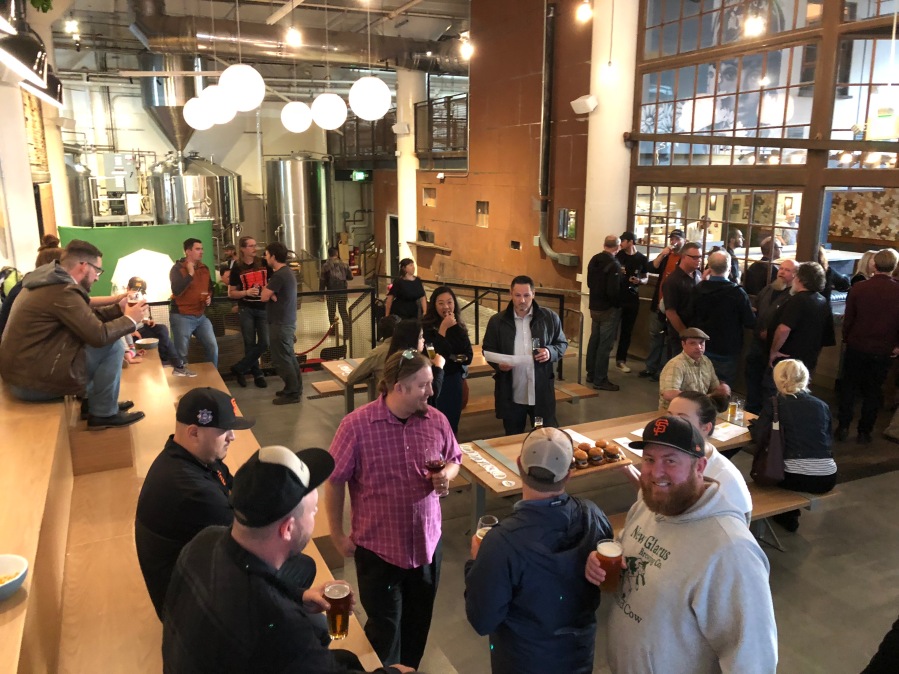 The former loading dock has been transformed into an “inside beer garden,” with new bleacher seats and picnic-style tables. A limited food menu will be served there. And for those who like local sports, a huge TV will be mounted on the wall in the beer garden area, out of view from the front bar. The beer garden space will also be available for private events.

Seth Wile continues to helm the 30-barrel brewery onsite. At the welcome party he was personally serving up four barrel-aged beers including a Chardonnay barrel Saison de Lily, a strong rye beer aged in a rye barrel, a Promised Land imperial stout in Pinot barrels and a blend of bourbon barrel imperial stout with fresh salty oyster stout. The latter was perfect next to some tempting chocolate dessert items. According to Wile, the plan is to put one of them on tap at a time until they all run out. They are one-offs, but there are more beers aging in barrels for future offerings.

What happened to the promise of wild, coolship beers made on premise? That part of the plan is still to come, in an addition that’s still being built out behind the brewery walls.  Meanwhile, you’ll find classics like Blue Bell Bitter, Kalifornia Kolsh and a tweaked and updated version of Proving Ground IPA, along with new creations including a Brut IPA and a Baltic Porter. Some sours out of New Belgium’s Colorado location rounded out the array of flavors.

Visit the new Magnolia Dogpatch at 2505 Third Street, located on the Third Street Muni rail line. You can even combine the visit with a stop at nearby Harmonic Brewing or Triple Voodoo – or even Speakeasy and Laughing Monk further out from downtown.