Ok, do you see the following image as a drool-inducing beauty or a muddy-tasting beast? For many beer drinkers, accepting hazy IPA (and its many cloudy cousins such as pale ales, DIPAs etc.) has been difficult. Clarity has been considered a signifier of quality in most beer styles, so the more you knew about beer making, the harder it was to take that first sip. The excitement expressed by fans and the widespread disdain from detractors has been about as polarized as beer preference can be. 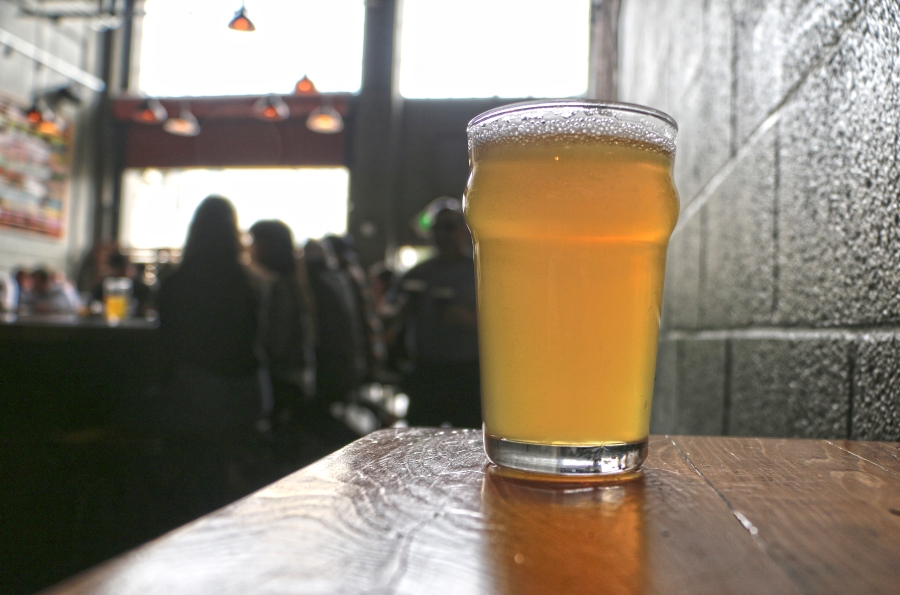 This intentionally soft, minimally bitter, hop-flavored variety has emerged over the past two decades, with most of the excitement centered on Vermont and New England in general. Hence, it’s becoming widely known as the New England IPA, or NEIPA,  However, unfiltered dry-hopped beers elsewhere in the land helped to push towards the look of the style as well.

Recently, my husband (and Beer By BART co-founder) Steve and I took part in a blind judged commercial competition, where a new category — style number 99 — was grafted onto the existing competition style lists to accommodate beers made with this style in mind.  Which is great because there are good beers competing but challenging since an emerging style by definition has no official description and the intentions of the brewers may not even be similar.

I didn’t serve on category 99 that day myself, though Steve did, but the inclusion gave me plenty to think about.  At one point, I was on a panel with one other diligent judge, carefully evaluating a flight of nine American IPAs.  Like in a lot of commercial competition flights, most were good, just not awesome.  Classic brewing flaws were few and far between.  We were to pass only one beer forward to the next round.  To our delight, it wasn’t even close. There was one beer that the other judge and I both felt was exquisite.  It was bright and clear, brightly aromatic in the circus-tropical range and delicately complex all the way through to a moderate but firm bitter finish with tropical hop flavors that lingered beautifully.  We were both wowed by this beer, in a day where we had already done other flights and styles but had not yet had a blind tasting tour de force.

An experienced judge who was not seated at the moment walked past as we wrapped up and asked how the flight had gone, and I said, “we just picked an amazing beer. You should try this IPA.”

He poured himself a sample, and commented, “Ah! A nice New England IPA.”

I think he saw the look on our faces. It was not hazy, and it had a satisfying but slightly restrained bitterness in the crisp finish.  Aromatics and fruity flavors from the hops were common attributes between this beer and a good NEIPA, I thought. But that was not what it looked or tasted like, nor how it was entered. It was, hands down, the best American style IPA in our flight.

Were our personal standards for a nice bitter IPA shifting? Are IPAs in general getting fruiter and less aggressively bitter?

So that reminded me that we already have a lot of East-West overlap going on in brewing today, from technique to hop selection to recipe development. Perhaps we actually have more like an IPA spectrum!

From that day, I started to work out the model for a great NEIPA based on the examples I’ve tried in California, around the East Coast and recently in Denmark.  (Yep, European craft brewers are happily playing with the style, too.)  This is in no way an attempt at a style definition, but here are the elements that go through my head as I decide if one of these hazy beauties is meant to be for me:

Sometimes I think the whole concept of styles is archaic.  New beers will never again spend centuries emerging in isolation in areas where only certain ingredients are found, certain yeasts shared and various pressures like taxes on specific strengths of beers work together to make an historical style.  Those days are over.

Competitions are the clearest reason popular new kinds of beers deserve categories. But competitions are not the most important social use for an agreed upon name and set of qualities for these inventive beers. As a consumer, I want a hint of what’s offered when an unknown beer is called an IPA on a menu board or a craft can.  This is a reason for style names in everyday life. NEIPA, or whatever consensus settles on calling them.

I like variety. I may want to order something clear today, or something cloudy, or a lightly hop-hazed glassful that falls in-between, but it would help to have a settled-upon style name so that seeing “IPA” doesn’t mean any possible beer you can brew with any detectable expression of hops.

Looking forward to find out how the language evolves along with the beers.